To those who attended Bebe Cool’s concert held Friday at Serena Hotel, they were welcomed by a rather rare scenery at the entrance to the hall where the concert was taking place from.

There were two luxurious cars in gold colours. One was a Lamborghini and the other a Bentley. Both cars belong to South Africa based Ugandan socialite Katsha real names Shafiq Katumba.

He is back with a bang and has warned to put all the self declared city tycoons to where they belong.

Asked for the price of his cars, he said the price would cause much alarm if it was revealed. Though, he was ready to give an estimate of the amount of money he invested in them. 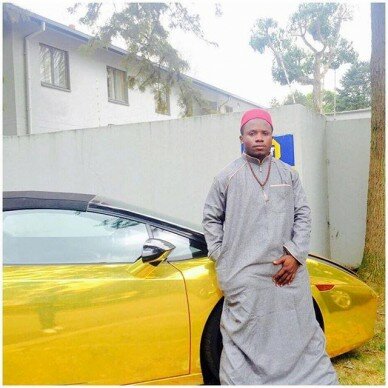 Katsha stands next to his Bentley

He says that his Bentley alone is worth four of SK Mbuga’s cars. “Go ask Mbuga for the sum he bought his cars and once he gives you the figures, add them together and the total you get is not far below what I bought my Bentley.”

Katsha’s statement follows a recent post made by Mbuga in which he posted four of his cars among which included some of the latest models of a BMW, Range Rover and two Hummers.

To him, if Mbuga was to buy his Bentley, he would have to sell all his four cars. He, however, didn’t talk about the price of his Lamborghini.

Meanwhile, he has a party tonite at Club Guvnor, the venue which he has booked for his ‘Money and Gold Party’ slated for December.

He revealed during an interview with Spark Tv’s Miles Rwamiti that he had already booked Club Guvnor for his December party, further adding he had paid for everything.

Uganda’s ICT Industry organization, ICTAU has announced its new Board of Directors who were elected ...

ClinicPesa and Kaaro Health Selected For the Make-IT Accelerator Programme

this year, let’s get the youngsters to save (for) Uganda

AT some point in December I was gallivanting round my neighbourhood and spotted a pile of curious-lo ...

aligning our personal objectives with our national ones

THE other day I said, on radio (KFM – where I am invited on Tuesdays to join a panel of serious peop ...

IN talking about what to expect in 2018, let’s start from the bottom and go upwards, since Age has p ...